No products in the basket.

The Red Fox (Vulpes vulpes) is widespread across the vast majority of British towns. The fox is an opportunist which has adapted perfectly to urban and suburban environments. It is a small member of the canine family, an omnivore that will eat practically anything.

Man is largely responsible for attracting foxes into the town environment, providing the fox with ready supply of food and habitat. Although people often enjoy seeing foxes around their homes or in parkland, foxes can cause significant damage and nuisance.

Foxes are nervous animals and will run away when faced with humans, however they may bite in self defence if an attempt is made to catch them. If you find a fox trapped in a building, do not try to pick it up. Leave it an escape route out of the building and it will leave as soon as it feels safe to do so.

Foxes will approach our homes, either through being inquisitive or seeking food. They quickly learn if the occupiers are friendly or not, and react accordingly.

Foxes eat a wide range of foodstuffs, including small mammals, birds, worms, beetles, berries, rabbits, eggs, insects, fruit and vegetables. Although foxes are predators, foxes are lazy so will not bother with elusive prey, where scavenging a meal will be easier. One third of their food is scavenged or deliberately provided by householders. They readily store their food, usually by burying it in the ground.

Foxes will take livestock such as chickens, ducks, rabbits and guinea pigs if they are not properly secured, but are unlikely to threaten cats, dogs or humans. The fact that they often appear unafraid of humans has more to do with the fact they know how quickly they can move compared to us.

Foxes are predominately nocturnal, however you may see urban foxes out during the day. Most foxes are rather secretive and are usually only seen fleetingly. They spend most of the day in burrows known as earths or dens. Foxes either dig these out themselves, but will also take over rabbit burrows enlarging the openings, or cohabit with badgers.

Urban dens may be under garden sheds and outbuildings, in overgrown gardens, or even under the floorboards of houses.

Urban foxes tend to live in family groups comprising of one dog fox, one dominant vixen and subordinate vixens which may be the young of the previous year. The group defends a territory located with a larger foraging area, which may overlap with other family groups. Urban territories are much smaller than those in the countryside.

Foxes breed once a year, with cubs being born during March and April. The average litter size is 4 or 5. The cubs begin venturing into the open from late April onwards, and will stay with the vixen until the Autumn. Urban fox cubs usually disperse between 3 and 8km (2-5miles) of their birthplace. Foxes born in towns rarely move into rural areas.

The fox year begins in January, the start of the mating season. At this time of year foxes will travel around the most and can be heard calling for a mate. This barking can be extremely disturbing, however this will only continue until the fox has found a mate.

In February, having mated, the vixens begin looking for suitable dens. After a 53 day pregnancy, the vixen gives birth to her litter of cubs in March.

The cubs start emerging from the den in April and moulting begins in the adults. By May the rapidly growing cubs are learning by play and begin eating solid food.

The vixen and cubs leave the den in June and may be seen lying above ground during July.

In August the cubs begin foraging for food themselves and sleep separately from their mother. By September it is difficult to tell the cubs and adults apart.

The cubs leave their mother in October and seek out their own territories. During November, younger adults fight weaker older foxes for territory, or take over the territories of dead adults. As the mating season approaches, newly acquired territory is defended in December.

Foxes can live over 8 years, however this is rare. The average life span of urban foxes is about 18 months; most are killed on the roads.

This is often expressed as the main cause for concern about urban foxes, amongst the public. Foxes can carry a range of parasites and diseases which could affect the health of domestic pets and people. Despite this, there is little evidence that foxes are a source of infection.

Foxes carry a number of internal parasites. For humans the most important are the roundworm (Toxocara canis) and tapeworm (Echinococcus). These diseases are transmissible to dogs and humans and are acquired through the ingestion of worms eggs passed in the droppings of an infected animal. The principal source of this worm is widely believed to be the domestic dog, one of the reasons why dog fouling in public places is of concern.

Foxes are also susceptible to Weil’s Disease (Leptospirosis), which can be passed onto domestic pets and humans via contact with their urine.

The most commonly observed infection of foxes is sarcoptic mange, which is transmissible to dogs and humans. It is a skin condition caused by a mite, resulting in extensive hair loss, and can be fatal for foxes if not treated. Highly contagious among foxes, there are few confirmed reports of mange being passed to dogs, and little evidence to suggest outbreaks amongst domestic pets.

We have a Homeopathic Mange Treatment for foxes which can be given in food.

Britain is currently rabies free, but in counties where rabies occurs, foxes can contract and pass on the disease.

Dealing with fox problems is the responsibility of the owner or occupier of the property where the problem occurs, and a realistic expectation of what can be achieved is essential.

Foxes are now established residents of many urban areas and are likely to remain so. They are attracted to gardens by the food and shelter they offer, and some people actively encourage them, by providing food. This may cause problems, and the interests of neighbours should be considered.

Unfortunately there is no simple solution to the problems that foxes cause. The first step is to positively establish that it is in fact a fox causing the problem. Often foxes are blamed for things they have not done; frequently the culprits are stray dogs, cats and even squirrels. Foxes can be identified by their droppings and paw prints.

If you are satisfied that a fox is causing your problem, ask yourself whether it really needs any action. Some problems will solve themselves in the course of time. For example a litter of cubs will disperse as the summer progresses irrespective of any action taken.

Unfortunately, there is no simple solution to the problems that foxes cause. The most effective deterrent is a suitable perimeter fence, however fox-proof fencing can be expensive and unsightly.

There are however, a number of alternative measures that will minimise, if not eliminate fox problems:

1.Do not feed foxes, either intentionally or unintentionally. Ensure that foxes cannot access food put out for other wildlife or pets. Make bird tables inaccessible for foxes to climb onto – erect a covered table at a minimum height of 1.5m (5ft), and always clear away spilt bird food. This will also help prevent birds being attacked by foxes whilst feeding.
2.Store rubbish, especially food waste, in fox proof metal or plastic containers. Ensure that dustbin lids are secure and avoid leaving rubbish sacks unprotected. If you have fruit trees, clear away wind-falls.
3.Damage to lawns is sometimes caused by foxes attracted to the presence of worms, beetle larvae, caterpillars etc. These pests can be removed using a commercially available insecticide, but this should only be considered as a last resort. If you have placed a fish, blood, or bone meal based fertiliser on your lawn, foxes will be attracted to this since it smells like buried food.
4.Provide secure, fox-proof accommodation for vulnerable pets and livestock, especially at night. Foxes can bite through ordinary chicken wire; welded mesh provides a much stronger alternative. Foxes can be very determined, especially if they have a ‘taste’ of what is available.
5.Foxes can be excluded from gardens by wire mesh fences. A suitable mesh fence needs to be at least 2m (6’6″) high, buried to a depth of at least 45cm (1’6″) and with a sheet of smooth material at the top of at least 30cm (1′) deep.
6.Chemical repellants can be used to deter foxes from your garden. The repellant has an unpleasant odour or taste which makes the area unattractive to foxes. Only compounds that are approved as animal repellants may be applied and they must be used in accordance with the manufacturer’s instructions. The most effective products are ‘Scoot’ and ‘Get Off My Garden’ and are available from garden centres and hardware stores.
7.Fill in excavations, with loose soil as soon as they appear to prevent foxes moving in. However care must be taken to ensure that the hole is not part of an active badger sett; blocking or interfering with a badger sett without a licence is illegal.

Foxes are not and have never been classified as ‘vermin’. If you decide to undertake fox control you are advised to employ a professional pest controller.

There are a number of methods of fox control that may be legally used. These include baited cage trapping, shooting and snaring.

It is illegal to use self-locking snares, any bow or crossbow, any explosive other than ammunition for a firearm, a live decoy or hunting with dogs, including deliberately using dogs to chase foxes away from gardens or allotments. It is also illegal to poison or gas foxes.

Fox control is generally not recommended in urban areas –

Trapping and killing does not necessarily solve the problem as other foxes from surrounding areas quickly move into the vacant territory and replace the animal that has been removed or killed – there is no such thing as a vacant territory.

Shooting and snaring are unlikely to be appropriate control methods in urban areas, for reasons of safety, and in the case of shooting, public disturbance.

Fox populations are self-regulating. They cannot over populate but will always breed back to replace numbers lost since the last breeding season. Evidence of fox numbers in the South East, is that there are up to 15% fewer foxes than there were in 1998. 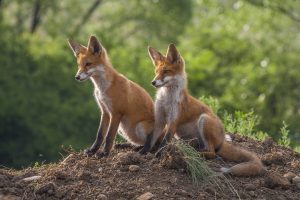 Ultimately this is a personal choice. There is no specific legislation that prohibits the feeding of foxes. However, if you do decide to feed them, it would be wise to consider what impact this may have upon your neighbours.

Whilst you may enjoy seeing foxes in your garden, it may be that your neighbours are encountering problems. Most fox ‘nuisance’ experienced by people in urban areas falls into three categories:

You should also consider whether the food you are placing out for foxes, is being eaten by foxes. Other less desirable animals, such as rats and mice, may be eating the food. If this is the case you should cease feeding immediately.